If you were to walk into Mitchell’s exhibit at the summer 2019 Arts in Nature Festival, you would see a cabin lined in white cloth, fresh grass, and stuffed, ghost-like creatures decaying into the floorboards. Hanging from the ceiling, or laid delicately over grass-framed beds, are unnervingly empty hand-sewn outfits. Over the speakers, different voices share their personal memories of home.

“Home is always kind of a potent symbol to me,” says Mitchell. 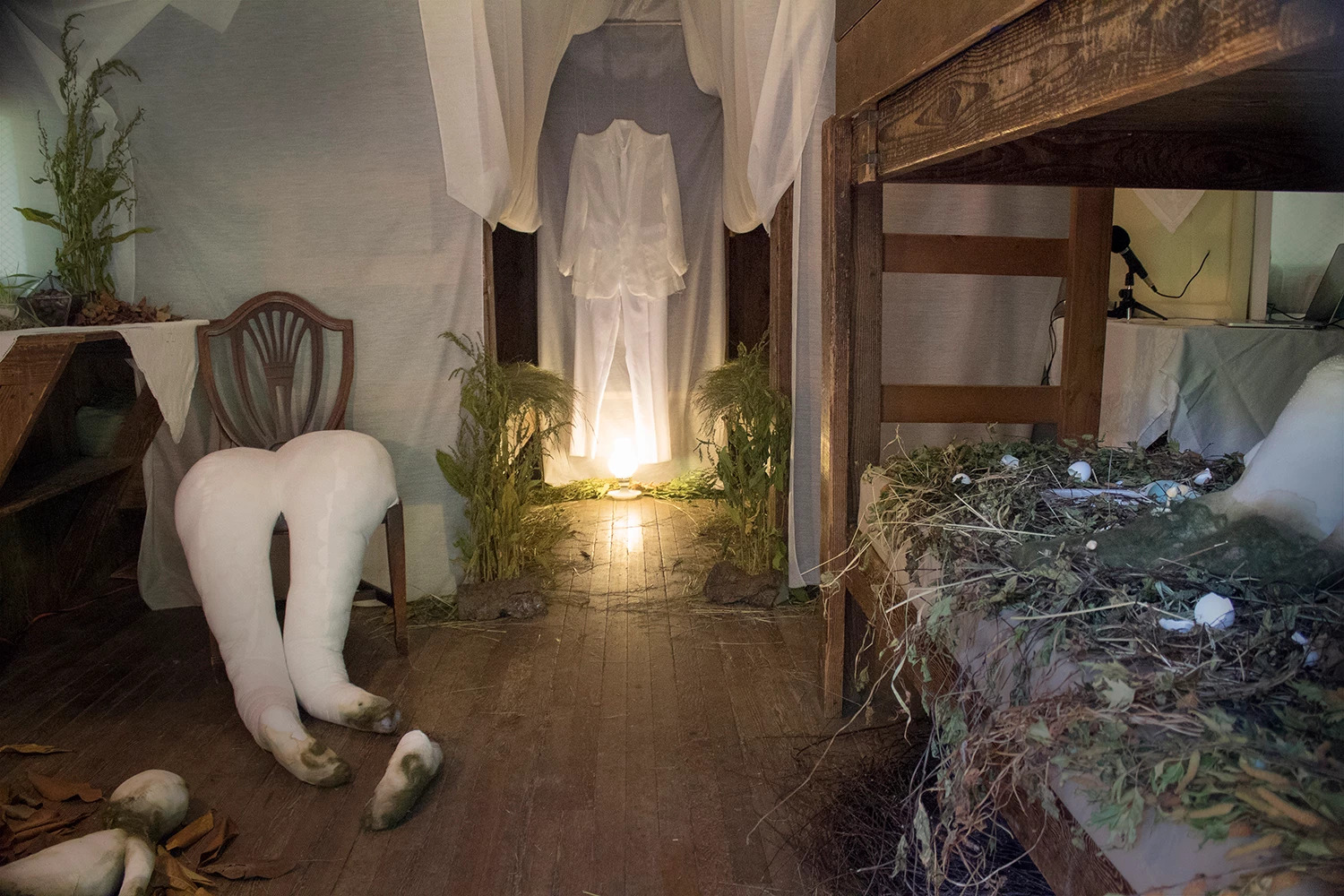 Looking in through the front door at ”Half Life” 2019.

The exhibit is “Half Life,” one of Mitchell’s many installation pieces. “Half Life” is meant to “explore the viewer’s relationship with life, decay, nature, and family.” These themes thread their way through much of Kelly’s art, creating a breadth of work that is dreamy, captivating, and unsettling.

When did you start being drawn to concepts of growth and decay in your art?

Mitchell: Way back in art school I was really interested in how location and land help form your identity, and it somehow grew from that. I think that my work comes from a really personal place. Not all artists work that way. They’re more formally driven. They’re more interested in shapes and colors and that kind of stuff, but I’m definitely more interested in concepts. It’s almost like therapy. It’s almost easier for me to make art about something deeply personal and show it to a bunch of strangers than it is to talk to someone I actually know about these issues. So yeah, it’s a way of working through things for me.

What is it about decay you find so fascinating?

Mitchell: I think it’s a really beautiful process. When something decays then something else can grow from it. If you think of a body decaying then those nutrients go back into the earth and something can grow from it. And ultimately this is what I’m trying to get across in my work, that natural scientific biological processes translate into interpersonal [processes]. So, in order for us to grow as people we have to let certain things decay in our lives.

Some people may perceive your work as being a little morbid. Do you feel like there’s a morbid aspect to your work?

Mitchell: That’s really interesting because the last big installation I did (“Half Life”) was a whole cabin that I got to do whatever I wanted inside. It was so interesting because I had to stay. Usually, you install the work and then you go to the opening and it’s great, [but] you don’t really see people’s reactions to it. But I had to stay with the work the entire time it was up. And there were definitely people that were like, “Ooh, it’s creepy. Why is it so dark? Like I don’t want to go in there. It’s scary.”

But then there was a woman who went in and came out, and she was crying. And she’s like, “I just lost my father and your work is exactly how I’m feeling.” That was such a cool moment for me because that’s what you hope for as an artist, that it will speak to people. It was this full spectrum of people being, “Why are you talking about this? Why are you making art about death?” and other people being like, “Thank you for talking about this.”

We live in a culture that doesn’t talk about death, which is silly, because it’s literally the only thing we all have in common. We will die, people we know will die, and just saying that is considered morbid.

So, decay is a natural process where you slough off things, including people. Are you referring to friendships, romantic relationships, family members, all of the above?

Mitchell: Yeah, all of it. You can cling all you want, and you can try to prevent death, but it kind of leaves you living a half life.

Was there an inciting incident, a death or a series of deaths, that pivoted your artistic interest in this direction?

Mitchell: My dad died when I was pretty young. That was influential because I feel like we definitely try to shield children from death. So it was kind of isolating for me because I had this experience and other kids hadn’t had that experience. It was weird and confusing to them. They would sometimes ask me unintentionally hurtful questions.

From a pretty young age I felt different, like I was experiencing the world differently because I had this shadow of grief, and we don’t live in a culture that supports processing that grief. It’s almost like it was delayed for me. Like the processing is happening for me as an adult, and I think the art came from that.

Mitchell comes from a home of artists and craftswomen. In fact, her mother was attending Cornish College of the Arts for design when she became pregnant with her.

“I grew up mostly around women. They were quilters and interested in making comfortable homes,” says Mitchell. “But there weren’t really any men around. It was like we were doing it for each other.”

After high school, Mitchell attended the Parsons School of Design in New York City, graduating in 2008 just in time for The Great Recession.

Mitchel, like many others, “flailed around for a while” trying to find footing in America’s newly crushed economy. It was hard for her to even get a retail job. Mitchell became embittered by her “impractical” art degree.

After moving to Seattle, Mitchell started teaching at a preschool, becoming the lead teacher before the school closed unexpectedly. She took the closing of the preschool as an opportunity to refocus on her art, enrolling in Seattle Central’s Visual Media program to pursue her passion.

You can learn more about Kelly Mitchell’s work on her website: https://www.kellyjunemitchell.com

ART SPACE is a weekly column highlighting local artists from Seattle Central. If you would like to be featured in this column, or if you would like to nominate someone, please email Harlow at harlow.poffenberger@seattlecollegian.com

Published in Features and Lifestyle